Xiaomi recently released the latest addition to its Redmi series, the Redmi 12 Pro+. While the series is climbing the price ladder fairly quickly, it also brings some big specs to the table. The highlight was the megapixel count that comes with the Xiaomi Redmi Note 12 Pro+. The smartphone brings with it no less than 200 megapixel main sensor, so that everyone is suddenly talking in megapixel terms again. While there’s no guarantee that more megapixels will always result in brilliant photos and video quality, there’s no denying that megapixels matter.

If used properly, more megapixels can produce images with greater detail, allowing you to zoom in on images without losing too much detail. In addition, a higher megapixel count means you get a higher resolution image that is usually more suitable for format printing and posters. And it goes without saying that a high megapixel count clearly makes it a more lucrative option for a smartphone, making it easier to market.

READ ALSO: How much are megapixels important?

Therefore, it may come as a surprise that the Redmi Note 12 Pro+ is not the first device with a high megapixel count. There are a number of smartphones with triple-digit megapixels in different price ranges.

So if you think you need more megapixels for your photos – be it detail or resolution – here are six phones that will get you over 100-megapixel photos.

(Note: Be sure to activate the highest megapixels mode as most are set to shoot in lower resolutions by default – with hefty megapixels comes hefty file sizes that eat up storage space) While this is the same as the number we saw on the Galaxy S21 UItra, Samsung has definitely kicked the device’s image quality up a notch. Much of the credit for this improved performance goes to the processor that runs the show on the Galaxy S22 Ultra: Qualcomm Snapdragon 8 Gen 1.

The processor came with an upgraded image signal processor that allowed Samsung to do more with raw data and as a result, that high megapixel count captures more detail. Apart from the great main sensor, the phone also brings a brilliant 12-megapixel ultra-wide sensor with a 120-degree field of view and two 10-megapixel telephoto sensors, one of which delivers a 3x and the other a stunning 10x optical zoom, a rarity on phone cameras. There’s also an impressive 40-megapixel sensor on the front.

The Galaxy S22 Ultra is definitely on the expensive side of the price equation, but it certainly packs tremendous camera power. Plus, it gets regular updates that not only bring Android up to speed, but often improve that already great camera. The tech world may love the newly launched Redmi Note 12 Pro+ and its 200 megapixel main sensor that launched recently, but there was a brand that did 200 megapixels on its phone camera long before Xiaomi did.

Already at the beginning of September 2022, Motorola released one of the most talked about smartphones of the year, the Motorola Edge 30 Ultra. The phone made headlines for many reasons, one of which was the 200-megapixel main camera sensor on the back of the phone. It was the first phone in the country with a 200-megapixel sensor, making it the first mega-megapixel phone. The main 200 megapixel sensor was equipped with OIS and PDAF.

There are two additional sensors to the main sensor: a 50-megapixel ultra-wide camera with a 114-degree field of view and a 12-megapixel telephoto lens that offers 2x optical zoom.

The Edge 30 Ultra didn’t shy away from putting a large numbered sensor on the front as well, bringing a huge 60-megapixel sensor for selfies and video calls. The highly capable cameras on the Edge 30 Ultra can pull out tons of detail and texture.

To top it off, the phone is powered by the most powerful Qualcomm Snapdragon SoCs at the time – the Snapdragon 8+ Gen 1 processor, which on paper is actually better than the chipset powering the Galaxy S22 Ultra. The phone also comes with an almost stock Android experience, making it an absolute treat for lovers of clean, uncluttered user interfaces. Samsung does not like huge numbers of megapixels. While its flagship phones come with 108-megapixel sensors, the brand has brought the big number to an upper mid-range phone as well.

Launched last year, the Samsung Galaxy A73 is a typical Samsung upper mid-ranger that has specs that fit the bill… with one exception. In the best Samsung tradition, you get a dynamic display and versatile user interface.

Other than that, the phone comes with a decent mid-range Qualcomm 778 processor. But the one feature that is the biggest USP of the Galaxy A73 and makes the phone stand out from the usual crowd is the 108-megapixel main sensor on the back of the phone.

While the megapixel count is the same, it would be a gross exaggeration to say that the Galaxy A73’s camera prowess is on par with the Galaxy S22 Ultra.

Still, the Galaxy A73’s main sensor is very adept in its own right, capable of capturing highly detailed photos in well-lit environments and displaying really punchy, vibrant colours. Accompanying the main 108-megapixel sensor are two very nominal megapixels. There’s a 5-megapixel ultra-wide and 2-megapixel macro, both of which nowhere seem quite as impressive as the main sensor.

A pretty good 32-megapixel sensor on the front helps you take great selfies. Aside from the 200-megapixel monster, the rare camera line-up also comes with 13-megapixel ultrawide and a 2-megapixel macro camera. The 200 megapixel sensor on the Zero Ultra is impressive and can take very detailed photos in good lighting conditions. The phone also has a 32-megapixel front camera for video calls and selfies, which allows you to take social media-ready photos.

Aside from its camera capabilities, the Infinix Zero Ultra comes with 180W fast charging support, the fastest in its segment. However, it’s the 200-megapixel camera that captures detail that’s the real star of the show. Some might not be super impressed with the MediaTek Dimensity 920 powering the phone which is a mid-range processor at best and can slow down a bit while processing the images and availability of the device has also been rather spotty , but the Infinix zero Ultra tries to bring 200-megapixel camera magic at a relatively reasonable price point, which is a really big plus for the phone. If you are looking for the best mega megapixel phone under Rs. 25,000, then your search might end with the Realme 10 Pro+. Recently launched, one of the biggest USPs of the phone is its main 108-megapixel sensor. Take the phone for a leisurely walk in a well-lit environment and it won’t disappoint. It captures a very good amount of detail and the dynamic range would definitely color you in awe (pun intended).

The main sensor is paired with an 8-megapixel ultra-wide and a 2-megapixel macro, both of which seem very pale for the main sensor, but you could do quite a bit with the main sensor itself. The 16-megapixel selfie snapper on the front is somewhat inconsistent, but it can take social media-worthy photos most of the time. The phone is powered by the MediaTek Dimensity 1080 chipset (similar to the one found on the Redmi Note 12 Pro+) which can easily get through your everyday and some advanced needs.

It also comes with a really nice curved screen with a stunning design making the phone quite an impressive deal under Rs. 25,000.

Redmi Note 11S: For those who want a lot of megapixels for little money 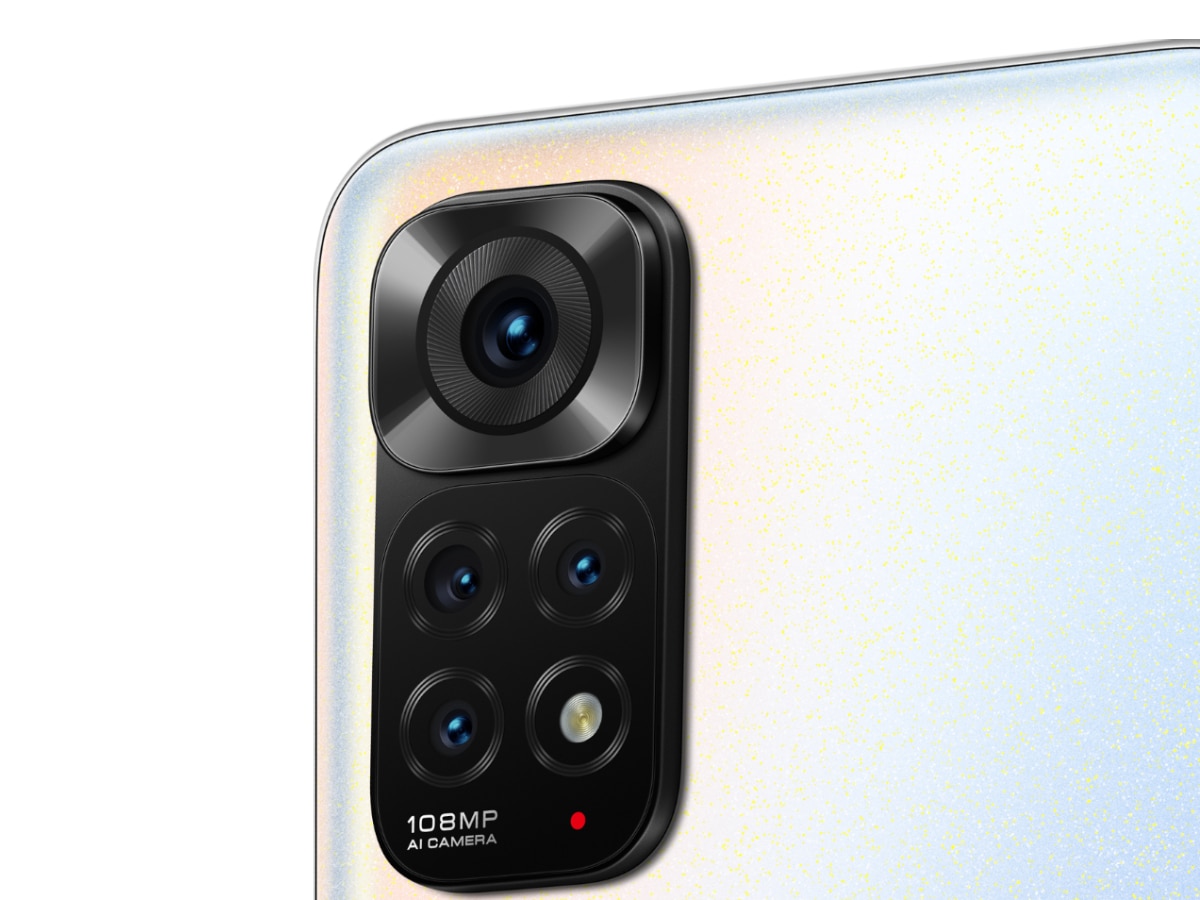 If your budget isn’t big, but the need to have triple-digit megapixels on your phone is, there’s a phone that just might save the day. Xiaomi may have launched a 200-megapixel sensor on the Redmi Note 12 Pro+ for a not very Note-like price (it’s the most expensive Redmi Note ever), but before the 12 there was an 11 following the ethos that made the Note range what it is today, down to a T. We are talking about the Redmi Note 11S.

Launched last year, the Redmi Note 11S had one huge selling point: its main 108-megapixel sensor. The sensor is very capable of capturing good photos with a decent amount of detail and offers good color reproduction in good lighting conditions when used to capture 108-megapixel shots. Just remember to keep your photographic expectations in check compared to more expensive options. There are two other sensors on the side of the main sensor: an 8-megapixel ultrawide and a 2-megapixel macro.

While the 8 megapixel ultrawide is quite usable, the 2 megapixel wouldn’t make much of an impression. The phone runs on the MediaTek Helio G96 processor which can easily handle your daily chores but is now showing some signs of age.

It still comes with Android 11 out of the box, which is a big bummer. There’s no 5G support on board either, which will be a disappointment to some, but other than that, in the best of Redmi Note tradition, the phone packs a large 5,000mAh battery with support for 33W fast charging, a good AMOLED screen and a not-so-high price tag, making it a deal worth considering if you just want megapixels on a smaller-than-mega budget.