vivo today unveiled a tablet and a tablet-sized phone. The vivo X Note is huge with its 7-inch screen and rounded sides making this not a one-handed device. If you want to go bigger and maybe add a stylus and a QWERTY keyboard, you’ve got the vivo Pad. 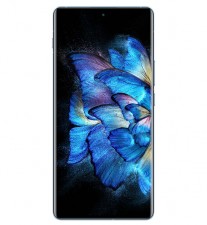 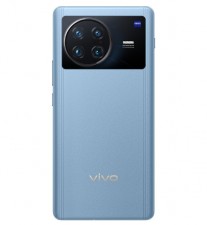 This juggernaut has a 7-inch Samsung E5 AMOLED screen with QHD+ resolution, giving you plenty of room to multitask. The screen has an unusual 21:10 aspect ratio (3,080 x 1,440 px resolution), but vivo claims this is superior for media consumption and multitasking. This shouldn’t surprise you, but DisplayMate gave the Note an A+ score. The screen promises a maximum brightness of 1500 nits and a DCI-P3 coverage of 112%. 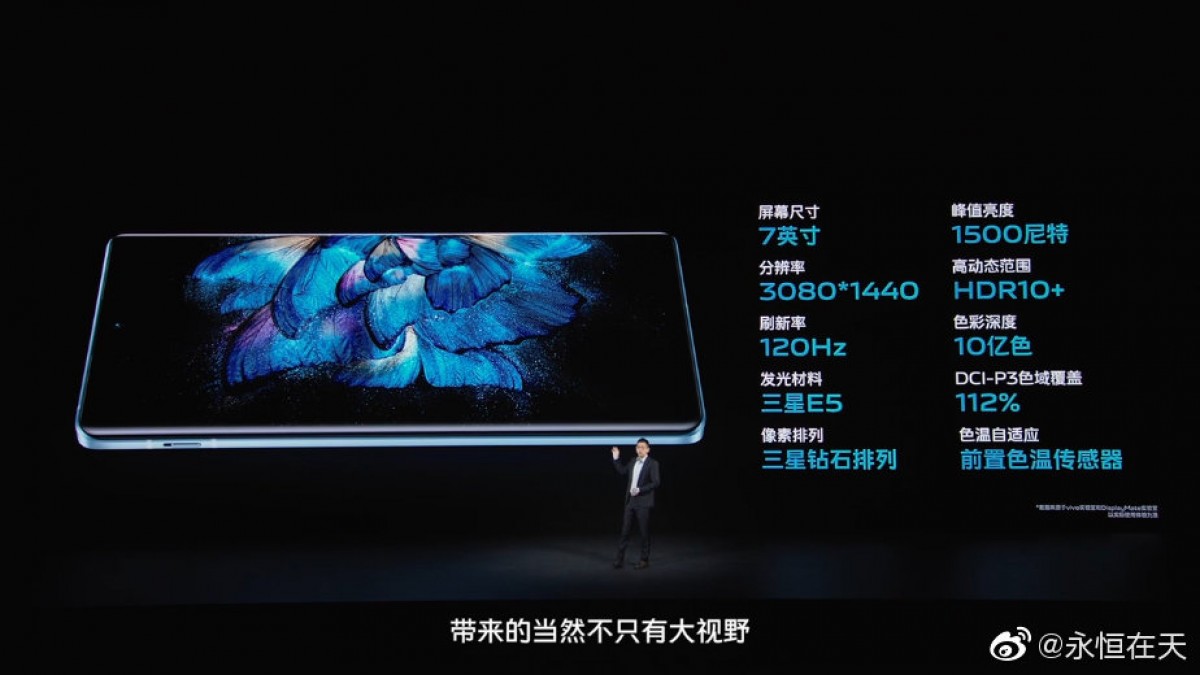 Hidden behind the screen is a large ultrasonic fingerprint reader (3D Sonic Max from Qualcomm), like the one on the iQOO 8 Pro. The FP reader is big enough to read two fingerprints at once — in fact, it only does that if you want more security (two fingerprints increase security 50,000 times compared to just one, says vivo). To aid color accuracy, a color temperature sensor is mounted on the front.

Returning to multitasking, the vivo X Note is powered by the Snapdragon 8 Gen 1, no surprises here. The basic configuration has 8 GB of RAM and 256 GB of storage. You can get a unit with 12GB RAM instead or go all out with a 12/512GB version. Security is enhanced by using the “Secure Processing Unit” (SPU) on the Snapdragon chip (first time for the company).

The chipset is cooled by a huge vapor chamber (47,132 mm²) and a graphite plate. Borrowing again from iQOO’s playbook, the GPU output can be fed through a MEMC algorithm to increase the frame rate without putting any extra strain on the GPU. 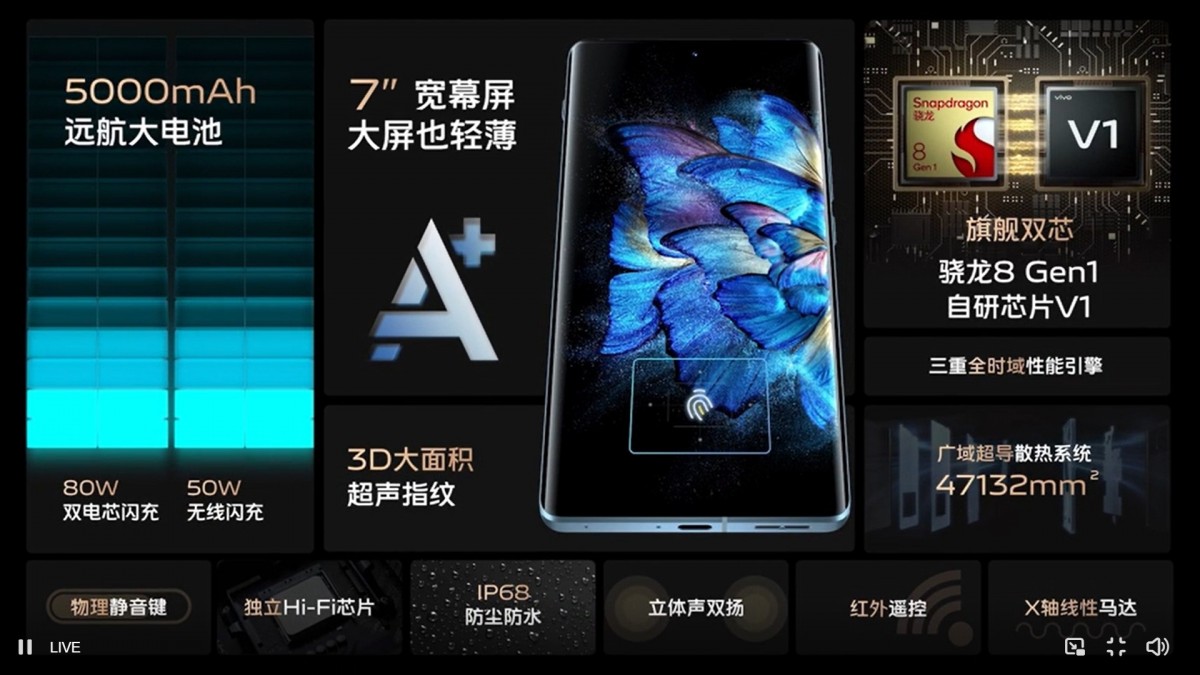 The Note comes with a quad camera on the back. It features the 50 MP ISOCELL GN1 – 1/1.3 inch, 1.2 µm native pixels, 2.4 µm with binning. Combined with the bright f/1.57 aperture, this camera will excel in low light photography. You may have noticed the ZEISS logo in the corner, the lenses are officially branded “ZEISS Vario-Tessar” and have a T* anti-reflective coating.

There’s also an onboard periscope with a focal length of 125mm (f/3.4 aperture), which is 5x optical magnification (and up to 60x digital zoom). For mid-range zoom and portraits, there is a 12 MP module (IMX663) with a 47 mm lens (f/2.0), which equates to 2x magnification. In addition, there is a 48 MP ultra-wide-angle camera with a 14 mm lens (114°). All this is supported by the custom vivo V1 ISP, which has enough power to perform face detection even if you take a picture of a group of 30 people.

Somewhat disappointingly, the battery that powers this behemoth is quite small – it’s only 5,000mAh in capacity. It’s fast-charging at 80W via cable and 50W wirelessly, but we still expected more from a large device aimed at power users. 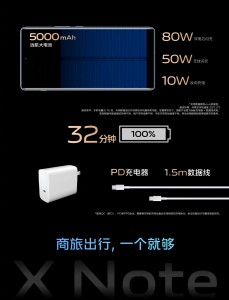 The vivo X Note has a 5,000mAh battery with 80W wired and 50W wireless charging

The Note is available in three colors: blue, black and gray. All three have a leather texture with mock stitching on the back, plus a full-width camera panel similar to the vivo X70 Pro+ (and presumably the upcoming X80 Pro+). 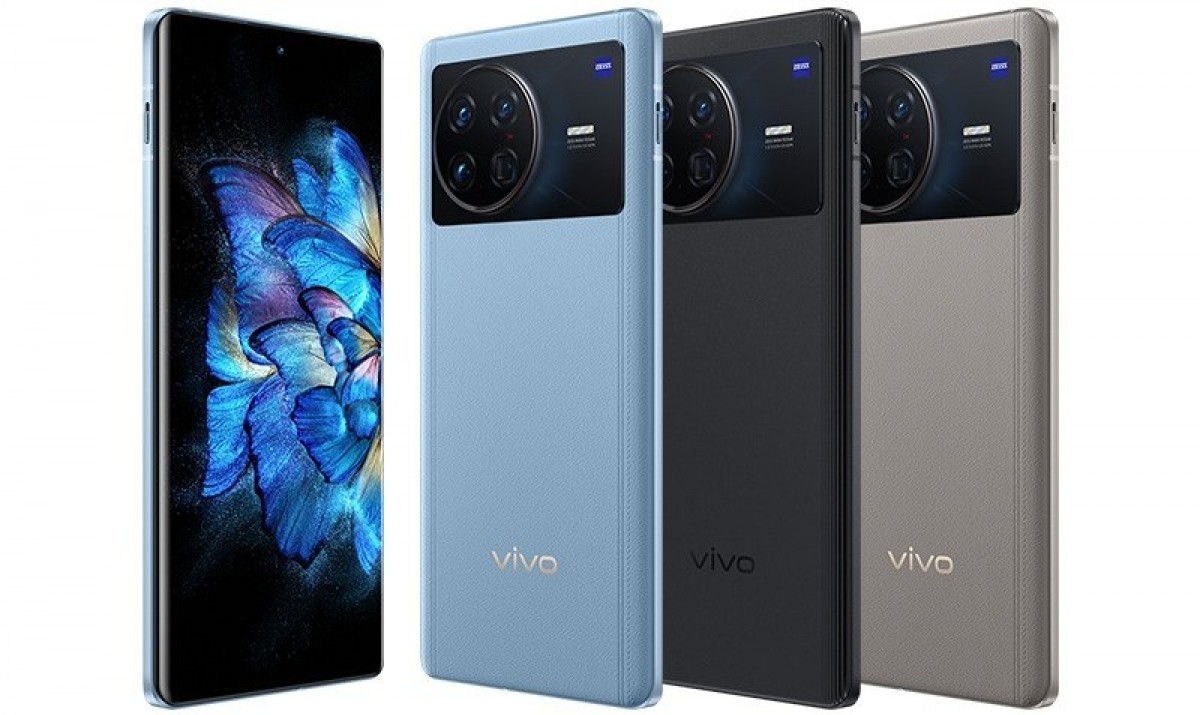 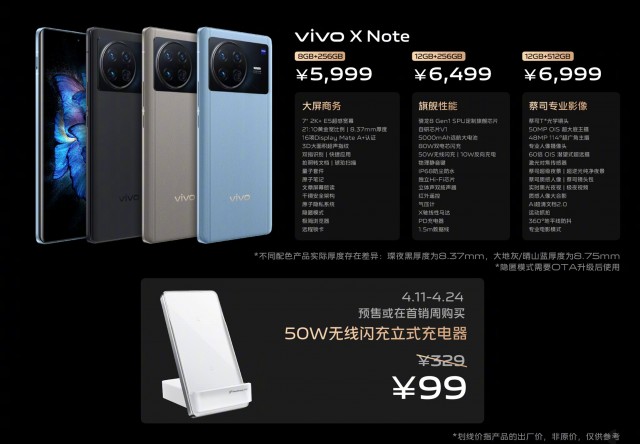 You can reserve a Note today, sales start on April 15 (Friday). Also on Friday, vivo will launch a limited edition vivo X Note Aerospace packaged in a gift box. The

If you want to go even bigger, the vivo Pad offers an 11″ screen. It’s a productivity-oriented convertible with a stylus and a keyboard. The optional keyboard has a trackpad, which you can combine with the flip cover with built-in kickstand for an experience which is closer to a laptop than a typical tablet. 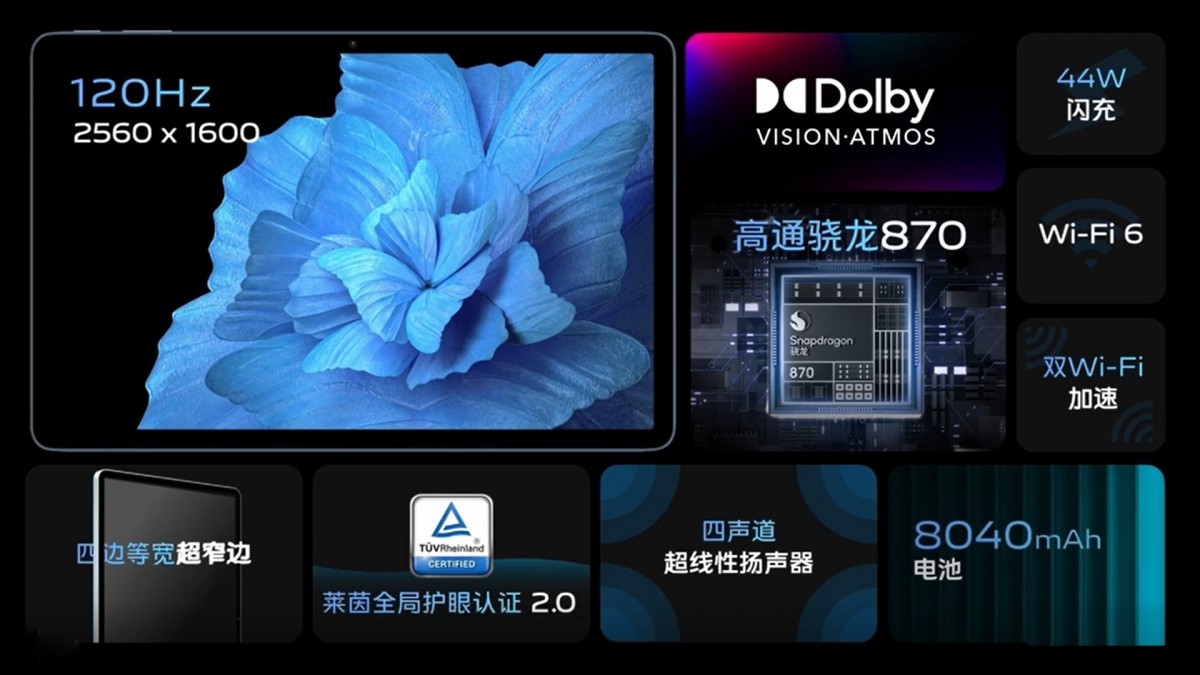 The screen also has a refresh rate of 120 Hz, the resolution is 2,560 x 1,600. It supports Dolby Vision and the speakers support Dolby Atmos for an excellent multimedia experience. Interestingly, in addition to the front camera on the front, there is a 3D ToF sensor. A stylus is supported and can distinguish between 4,096 pressure levels. 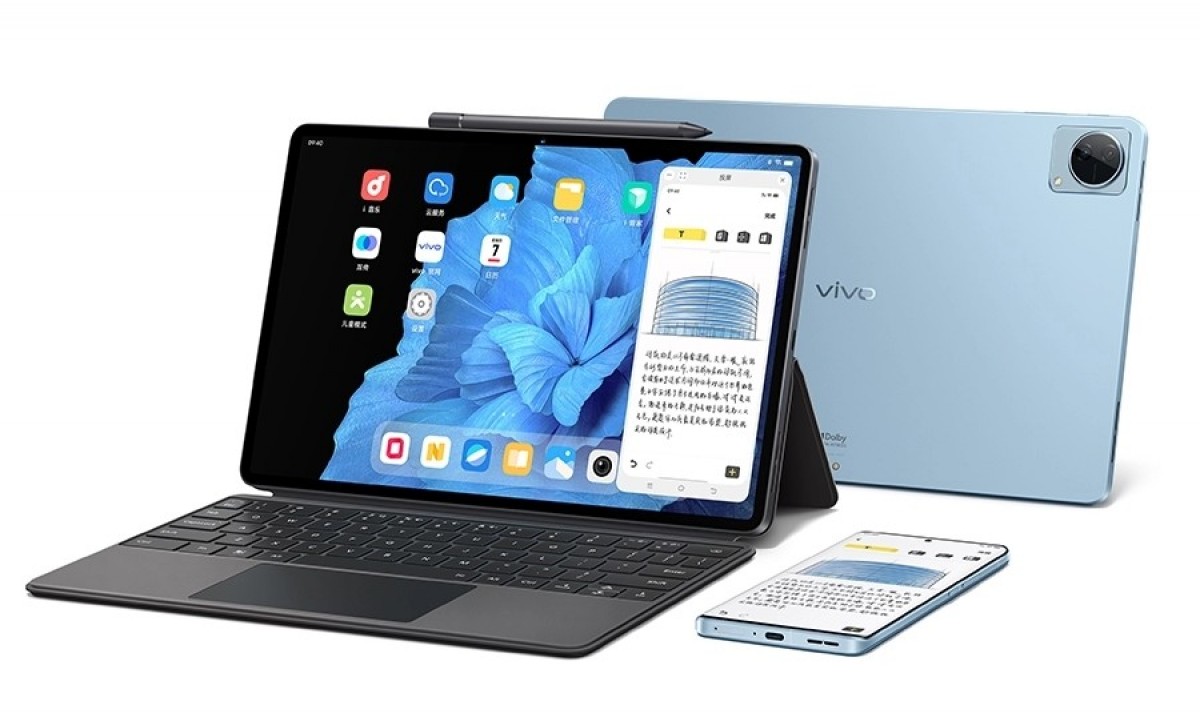 The vivo Pad is powered by the Snapdragon 870 and runs a new branch of vivo software called Origin OS HD. A nice feature is using NFC to pair your vivo phone with the Pad, which will mirror the phone’s display on the tablet. Then you can interact with phone apps and easily transfer files between the two devices.

The Pad is quite slim at only 6.55mm thick, is made of aircraft-grade aluminum and weighs 498g. You won’t see any antenna lines spoiling the clean lines of this slate, instead vivo hid the antenna under the screen using technology it developed in-house. The tablet’s 8,040mAh battery supports 44W fast charging. 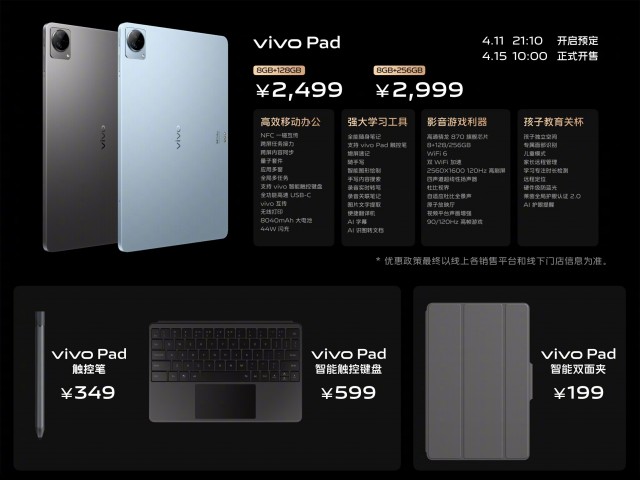 Prices for vivo Pad and accessories (note: there is a small launch discount for the Pad) 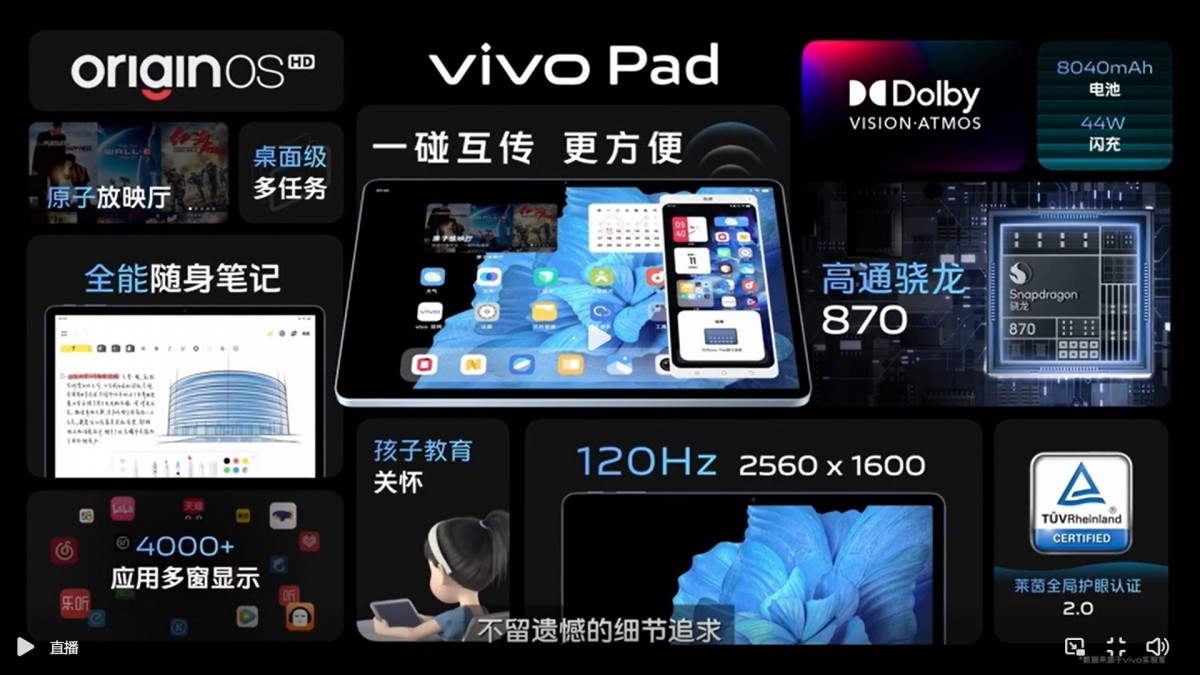 Samsung Galaxy A23 vs Vivo T1 5G comparison based on specs, check which phone works…